Fantasy ambient soundscape and ethereal atmosphere overlayed with relaxing and beautiful work of celtic harp. A mythical soundtrack to the magical journey into the sacred realm of ancient and forgotten forests. 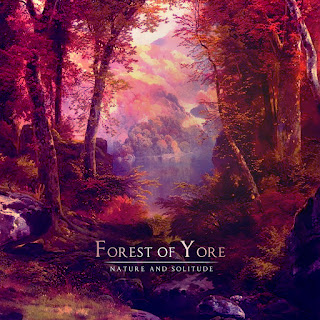 Artist says:
"...As I walked the path towards the sun dawning on horizon, there in front of me, as a vision beyond time and space an ancient woodland appeared. Giant trees branching high towards the sky, red and purple leaves crowning their tops as rays of morning Sun reflect in crimson radiance. The trees, titans of the land, are so tall and graceful that eyes cannot grasp their beauty. Legends and stories have been weaved around this magical place for centuries... Some say that an ancient race lives inside the very depths of it, around and underneath the lake, which is believed to adorn the center of the immense forest; some even tell that the forest is alive itself - that it's a giant being which sees, hears, feels and thinks. Whatever the truth is, I make my step further on and I enter... the Forest of Yore."

Check out the official Prometheus Studio and Forest of Yore bandcamp page for more:
prometheusstudio.bandcamp.com & https://forestofyore.bandcamp.com/