The folk metal scene of Russia is extremely strong and present. The guardians of the tradition of their ancestors live and preserve their culture through their music. One such band is Grai. These days we’ve talked about music and everything with  Irina Zybina and Ruzveld Grai.. 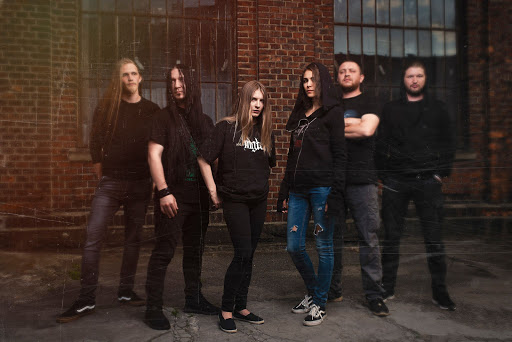 1. Why the name Grai? When and how was came that idea?

Irina / Ruzveld: Actually, the name came a bit later than the band was formed. At the very beginning, the band’s name was Raven Blood. Later it was decided, that the name shall be changed for something less trivial, and that it shall be sonorous and reflect the folk component of our music. That’s how the name Grai which means the bird’s cry was created.

2. You define your music folk and pagan metal, inspired by russian nature and culture. What is the impact of that?

Irina / Ruzveld: Since Russia is the large country inhabited with people of many nationalities and cultures and having various types of climate and nature landscapes, that’s really an undrainable source of inspiration. The mysterious thick forests, the olden swamps and the wicked heaths, the tales and the ancient songs of different folks – everything can become an inspiration.

Irina / Ruzveld: The band of like-minded people united with the desire to create something beautiful and to get the ideas, feelings and emotions across to the audience. We hope that everyone can find something of his/her own in our music.

4. Last album "Пепел" was well received by the audience, which was to be expected. How are you and the band satisfied with him?

Irina / Ruzveld: The feedback from the audience was even better than it was expected, indeed. Since the album became the transitive step to the music of another kind in comparison to our previous LPs, we haven’t expected the public reaction to be so warm. As for the band, we’re really proud of this work. To our mind, at this very moment, it’s the most deliberate and mature album, and we hope that it’s the first step to something new and magnificent.

5. You often collaborate with other artists from folk/pagan music world. What are your experiences of these cooperations? Will You continue to explore music with other musicians and artists that you'll be sharing the listeners?

Irina / Ruzveld: That wouldn’t be quite right to say that we have many collabs with folk/pagan bands particularly. There was the participation of our vocalist in the album of Ukrainian band Sventoyar and several collabs with the Slovakian band Ramchat. Anyway, that’s always a huge honour to get such an offer from any band or musician. Moreover, it’s a great responsibility, because people put trust in you when they suggest being a part of their music. For now, we can’t say exactly about the plans in that respect, but we also do not rule out such a possibility.

6. What is the music for you? In which way music defines you?

Irina / Ruzveld: Despite the fact, that all the band members have different tastes in music, we’re equally of our opinion that music is our life. We simply can’t imagine our existence without music. It surrounds us everywhere both in our concert activities and in the common life, and moreover, that’s an enormous source of inspiration, of course.

7. How our readers can buy Grai albums?

Irina / Ruzveld: To order our albums and our merch, you can anytime contact Ruzveld Grai on Facebook directly; you can also order it per Bandcamp (www.grai.bandcamp.com)  or contact our label Noizgate Records.

Irina / Ruzveld: We can lift the veil a little bit and tell that we’re planning to upload several home-like videos like the one we’ve uploaded at the end of July. We also have a surprise for our fans which we’d still prefer to keep in secret for this moment. And of course we’re working on the new material for the future release.

9. Another concert in Serbia, perhaps?

Irina / Ruzveld: Unfortunately, we can’t make any predictions right now, because of the world situations. But we hope for the better and believe that it’ll happen as soon as the borders are opened again.

Irina / Ruzveld: Take care, listen to good music, support the artists and see you at the gigs!

Made by: Predrag G.