Music from Iberian Peninsula has always attracted me. I love bands that come out of there. Such is the band Urze de Lume with whom we talked about music, future plans and something interesting. 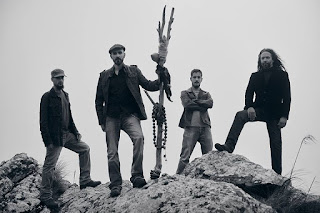 1.  Why the name Urze de Lume? When and how was came that idea?

Ricardo Brito: Urze is a common bush that grows in the wild, and its been used since ancients times till nowadays for a lot of different purposes.
We also added the word Lume because during the foundation of the band one of us pictured someone with a piece of Urze burning in the dark. It also represents that our ancient legacy is still alive and burns in our hearts.

2. You define your music as dark folk, maybe ur- folk. What is the impact of that?

Ricardo Brito:  It’s funny, in the beggining we never tagged our band as dark folk, we simply felt that we did some kind of folk, a bit different from what more traditional folk bands were doing.
We never tryed to fit in any label, we just wanted to do new music, influenced by our ancestral culture. And in some way pay homage to those people and that era, were man and nature walked hand to hand. The former members come from regions in Portugal that still have a great connection to nature and were the old ways are still very present. Due to that concept and sound, a dutch friend from the famous blog Pagan Roots, named us as „Portuguese Dark Folk“. Since that time, we’ve been describing our band as dark folk. For us, we see our music as a mix between mistery, ocult, heritage and a need to return to our origins, and we do folk music in a very dark era...

3. Album Caminhos da Urze was well received by the audience, which was to be expected. How are you satisfied with him?

Ricardo Brito: Caminhos da Urze was very well recieved by our audience, and we are also very satisfied with that album, not only because we were able to explore new paths and new instrumentation, but also because we dove deep in our roots and we brought to life stories in shape of music that were been told to us trought time. It is a very important album in our career, because it opened doors for whatever we want to explore, inside and outside music.

4. Often collaborate with other artists and publish Raiz Iberica compilation. What are your experiences of this cooperation? Will you continue to explore music with other musicians and artists that you'll be sharing the listeners?

Ricardo Brito: Yes its true, we have been colaborating with different artists through time. It’s always good to accept the chalenge of trying to enrich someones work with your art. It’s a great responsability. In the case of Raíz Ibérica, for us, it was the most important colaboration so far. When we recieved the call for this Iberian fellowship, we were completely outside from this whole music scene. We were on the extreme of west europe making our music. Raíz Ibérica really changed the Iberian musical scene, new colaborations had began, new oportunities to exchange knowlege and art forms, and most of all, the beggining of a great brotherwood of bands that share the same roots. The Iberian neo/dark/ur folk music scene is now closer and stronger. In the future we will surely continue to collaborate with other artists. Right now we are recording new material for a split with our brothers from Spain, Àrnica.

5. What is the music for you ? In which way music define you?

Ricardo Brito: In Urze de Lume, music is just one form of telling stories, creating ambients and celebrating our past. Urze de Lume as a concept that in our oppinion transcends  music, we fell that in the future it can be something else besides music. 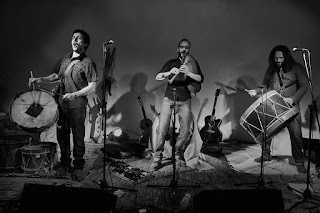 6. Urze de Lume was part of a large celtiberian musical movement. As you progress in that? You're in the spring of this year, organized a music festival,  can you tell us something about it?

Ricardo Brito: Since Raíz Ibérica we fell that our Iberian bonds are stronger, and through music, we are somehow bringing back the union we had in the past, and that can only be benefic for everyone. We came from Portugal, also known as Lusitania, and Lusitanians and Celtiberians shared a lot in the past. Maybe its our destiny to support each other in the present.
On the spring of 2016 OESTRYMNIS Festival de Arte Folk came to light. It was a dream where we and Trobadores Bar were working for some time. We manage to made it with a special help from our closer friends and it was a success. Many people came from diferent places, with diferent ages and interests, and most of them felt touched by what they found there. A pure and true celebration of our roots, in the most diverse art forms.

Ricardo Brito: The future will surely bring great news for us and for the people who follow Urze de Lume. Right now we are finishing the recordings for the Split with Àrnica. For the end of December we will also release a very special surprise. And in 2017 we will be organizing the second edition of OESTRYMNIS Festival de Arte Folk, and also start the recordings for the new album with Equilibrium Music.

Ricardo Brito:  It would be a great pleasure for us  to share our music in such a special country. Maybe some day we can have that oportunity!


9.  And in the end what will you told readers in Serbia?

Ricardo Brito: We would like to thank you all for the support, and ask you all to keep your roots alive. We would also like to thank Celtic Slavic Webzine Serbia for supporting underground, and support Urze de Lume.  Keep up the good work!