New KOLAC album “Zauvek Crni” will be out on December 12th!

New KOLAC album “Zauvek Crni” will be out on December 12th!
Serbian traditional grim Black Metal division Kolac signed with Grom Records for the release of their debut album "Zauvek crni" out on 12th of December 2015. 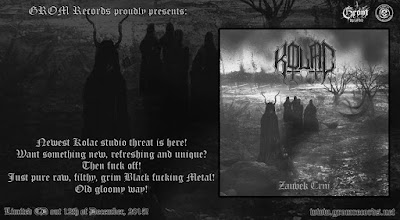 
KOLAC stated: “Zauvek Crni is a second step through hell for Kolac. Following the footsteps of the well received debut, yet this time with a double dose of darkness, and with a special outlook on the Black Metal genre, while still keeping the grim, filthy fury trademarked by the Black Metal originators. Zauvek Crni will take you back to the roots, combining the rage and anti-religious attitude of the first wave, and cold melodies of the second wave. Match made in hell for all the souls dwelling on the old Underground traditions. Furthermore, we are more than honored to take the, almost a decade long, cooperation, mutual respect and support with Grom Records to a new level, and hope that together we can keep raising hell even stronger!”

GROM Records stated: “Since we started with our activities back in the days our primary goal was to support dedicated and extreme metal hordes loyal to the almighty undergrund laws and honor. Kolac are a perfect example of true and devoted Black Meal horde with no bullshits and pretendings. Black Metal in the original form: grim, raw and dark, that’s what they are creating and that’s what they are standing for! We are more than proud to join our forces with the band and united we will spread their madness all around the netherworld.”