These days, we talked to the great pagan metal of Russia. Introducing the band, Smuta.. 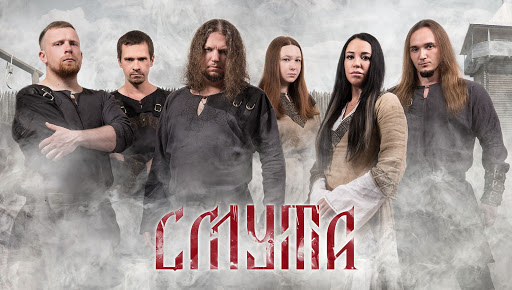 1. Why the name Smuta? When and how was came that idea?

Evgeniy: Well, let me remember... The very idea came to me a long time ago, I think about 15-20 years ago, when I only planned to form a band. "Smuta" as a negative and dark word with historical connotation seemed to be an appropriate name for Pagan metal band, I think. :)

2. You define your music folk and pagan metal, inspired by russian nature and culture. What is the impact of that?

Evgeniy: Certainly, beauty and diversity of nature, archaic beliefs, culture, mythology and also rich historical legacy of Central and Northern Russia strongly affected our creative work and became the foundation we have always been based upon and inspired by when composing our songs.

Evgeniy: Smuta is the time of troubles, riots and disorder, extremely hard times in the history of both our Motherland and other countries whether it is the 10th, 17th, 20th or 21st century. It is the time of pain, suffering, exasperation, permissiveness and anarchy.

4. Two last albums, "Tribute to SMUTA "15"" and ”The Time Of Troubles”, was well received by the audience, which was to be expected. How are you and the band satisfied with this albums?

Evgeniy: We are quite satisfied in general. Of course after a time some thoughts appear that we could have done it better, but it is just display of perfectionism. :) Particularly, I would like to point out tribute album "15", as unlike full-length album "The Time Of Troubles" it was an absolutely new format for us. We are glad that it came out just the way we planned. It was a perfect present for our anniversary!

5. You often collaborate with other artists from folk/pagan music world. What are your experiences of these cooperations? Will You continue to explore music with other musicians and artists that you'll be sharing the listeners?

Evgeniy: Perhaps an example of the most productive collaboration with other musicians is the abovementioned "Tribute to SMUTA "15". ))) Also there were joint gigs and records with colleagues in the industry and also participation in tribute-albums. I can’t say that we have a lot of such experience, but during 15 years of our creative work we definitely had some cases, and I think some joint projects will appear in the future.

6. What is the music for you ? In which way music defines you?

Evgeniy: It’s hard to say... music for me is an integral part of life. It affects my emotions and mood, and it is always close by.

7. How our readers can buy Smuta albums?

Evgeniy: If you are talking about CD, they are available in official internet-shop of our label SoundAge production: soundage.org/shop/ , digital copies are available, for instance, at our Bandcamp: smuta.bandcamp.com .

Evgeniy: Our new single "Wormwood’s sorrow" is coming out early autumn. I think it will provide some insight into our upcoming album, which is in process now. We are also planning to make a video for one of new songs. Also we hope to play first show this autumn after more than half-year forced interruption.

Evgeniy: Nothing is impossible. Proposals from promoters are always welcome. We do have plans and desire to visit Europe with our concerts.

Evgeniy: Listen to good music, take interest in history and culture of your land and in the light of recent events take care of your health and your relatives. Hope to see you at our concerts!

Made by: Predrag G.