From January 2017 the International Black Metal collaboration THE COMMITTEE is proud to announce the release of their second full length album “Memorandum Occultus”. The album is the result of hard work and years of research. The 6 songs of this album are chronologically and strategically selected to form one single unit that invites you into a new Global chapter of The Committee.
Memorandum Occultus is a methodological journey through a dark world of intrigues, lies, deceit, outright manipulation, suffering and genocide. The image is shown through the eyes of the rich and powerful shepherds that pass their knowledge to the next generation of rulers. It is a story for those of us who realize that the crooked mirror of “every day reality” is a mere veil pulled over our eyes. Memorandum Occultus is a detailed roadmap for enslavement and outright genocide of millions. It is a ruthlessly effective and flawless system of steps and guidelines for a self sustaining system of “Structureless Control” perfected over many centuries. 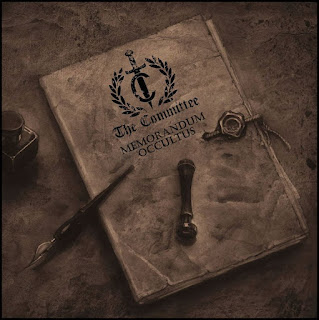 From 2007 The Committee was born as a one man project and remained so for many years. From 2012 with the addition of new members, it became a complete band. The Committee takes pride in the rich cultural diversity of their members, being a complete international collaboration. Since the release of the debut “Holodomor” the band attracted interest in the underground extreme Metal scene. After the release of the full length album “Power Through Unity” The Committee started performing live. Although the collaboration does not perform many live events, they strive to make each and every event into a ritual. Their focus is on the music and the message. Their motto is: “Anthems of the Executioners – Voice of the Dead”. The Committee is not a political band and does not promote any extremist ideologies. The views of the band are cold, pragmatic and methodological with a twist of cold cunning realism.

Originally The Committee started out as a doom metal band. However with the influence of the new members, new refreshing black metal riffs were added and subsequently brought the band to a new level. One of the trademarks of The Committee is a low, guttural guitar sound that touches the senses and emotions. The drums have different degrees of variation from slow dragging ritualistic and tribal tones to full throttle blast beats. The bass is not limited to a support act, but provides the needed variation in the form of self expressed solo's and punchy attacks. The low “grinding stone” vocals tell the story of pain, suffering and sheer horror.
As a special act, there are 3 guest vocalists performing on “Memorandum Occultus”.

Memorandum Occultus features 6 weapons of manipulation of large masses of people ranging from the least effective to the most effective and destructive. It is a roadmap and a crash course in enslavement of millions and maintaining a strict dictatorial control. It invites you to travel through the centuries and develop a methodological view of the events around ourselves and their subsequent interpretation. In total, 14 people in- and outside Europe have combined their efforts to create this album.
Објавио Predrag G. у 01:12